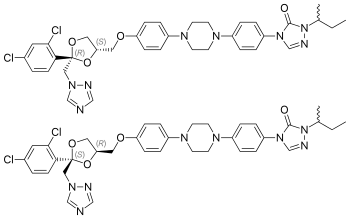 Itraconazole has a broader spectrum of activity than fluconazole (but not as broad as voriconazole or posaconazole). In particular, it is active against Aspergillus, which fluconazole is not. It is also licensed for use in blastomycosis, sporotrichosis, histoplasmosis, and onychomycosis. Itraconazole is over 99% protein-bound and has virtually no penetration into cerebrospinal fluid. Therefore, it should never be used to treat meningitis or other central nervous system infections. According to the Johns Hopkins Abx Guide, it has “negligible CSF penetration, however treatment has been successful for cryptococcal and coccidioidal meningitis”.

It is also prescribed for systemic infections, such as aspergillosis, candidiasis, and cryptococcosis, where other antifungal drugs are inappropriate or ineffective.

Itraconazole has also recently been explored as an anticancer agent for patients with basal cell carcinoma, non-small cell lung cancer, and prostate cancer. For example, in a phase II study involving men with advanced prostate cancer, high-dose itraconazole (600 mg/day) was associated with significant PSA responses and a delay in tumor progression. Itraconazole also showed activity in a phase II trial in men with non-small cell lung cancer when it was combined with the chemotherapy agent, pemetrexed

Wallet for computer and mobile